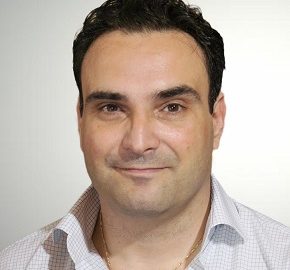 Emmanuel Kymakis is a Full Professor at the Department of Electrical & Computer Engineering of the Hellenic Mediterranean University (HMU), Vice-President of the HMU Research Center and Director of the interinstitutional Post-Graduate Program “Nanotechnology for Energy Applications”. He received the B.Eng. (First Class Honours) degree in Electrical Engineering & Electronics from Liverpool University in 1999 and the Ph.D. degree in Electrical Engineering from Cambridge University in 2003. He and Prof. Gehan Amaratunga are the inventors of the polymer-nanotube solar cell. Before joining HMU, he was a technical consultant offering engineering and consultancy services in the realization of photovoltaic and solar thermal power plants. He has >100 SCI publications and over 9.500 citations with an h-index of 51. He has been an honorary lecturer at UConn and a recipient of an Isaac Newton and an EPSRC studentship. He was named as a 2014 ChemComm Emerging Investigator and has received two National Excellence Awards. He has served as a member of the founding General Assembly of the Hellenic Foundation for Research & Innovation (HFRI), the Engineering sectoral scientific council of the National Council for Research & Innovation of Greece (NCRI) and the Engineering thematic advisory council of HFRI. He is currently the leader of the Energy Generation WP of the FET-Flagship Initiative Graphene.

His multidisciplinary research lies at the interface between nanotechnology and electrical engineering and is centered on the development of printed optoelectronic and photovoltaic devices.